Avon has been at the forefront of the fight against breast cancer since 2001 in Ukraine. In 2018, the company asked us to find a new approach to their annual breast cancer awareness and charity campaign.

We started with research that showed that awareness of the disease has risen since the previous decade, but still, 27% of women said they have never had a check-up, and 30% did not intend to do it in the nearest year.

At the same time, medical statistics stated that 1 in 7 Ukrainian women would face breast cancer during their lifetime. Half the time, the illness claiming its victim's life, primarily because of late diagnostics. That is why convincing Ukrainian women to see a breast physician before it was too late became our main challenge.

To help women overcome the fear of possible news about breast cancer diagnosis, Avon launched a brave relay when women encouraged each other to see a breast physician. To start this relay, we partnered with a Ukrainian lingerie producer Anabel Arto and created a special collection of lingerie – BRAve – which was made by seamstresses who got breast cancer screening before sewing the bras. After the screening, the seamstresses wrote personal messages to customers to encourage them to check their breasts and continue the relay. A heartwarming short film narrated seamstresses' appeal to other women: be BRAve. Hearing the message, women then became the messengers themselves, motivating each other with their own message of bravery thanks to special BRAve postcards sold in stores and online.

We also presented BRAve collection to media and influencers to launch our brave relay on social and traditional media. 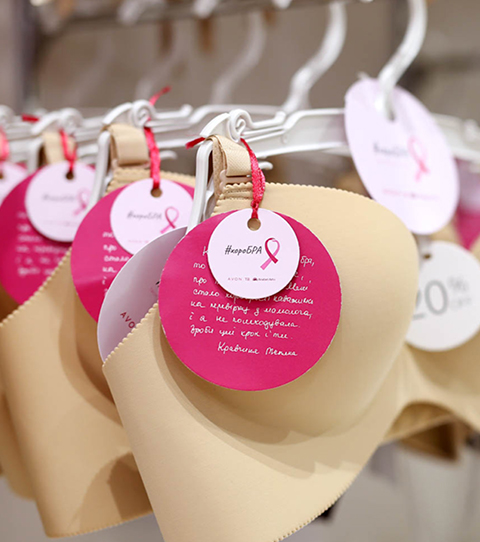 71% decided to have a breast check-up after our BRAve nudge (these are women who have never seen a breast physician before and have not planned such a visit).

BRAve bras sales increased by 265% compared to the sales of the similar collection of lingerie in Anabel Arto stores in the previous year. These sales increased funds to purchase a new digital mammographer that has been donated to the Sumy Oncology Dispensary, as 10% of sales went to the Avon charity fund.